There are two basic approaches to designing a wireless system – build the system from the ground up, with an RF chip, passives, filters, and connect an antenna, or use a wireless module that integrates all of these elements into a complete system.

Build from scratch or use a module?

The main advantage of building a system from scratch is that – in the long run, and with enough volume – the unit cost will be lower. However, to truly save money over the full lifecycle of a project, including design cost, testing, handling certification issues, and additional procurement and manufacturing complexity, it is necessary to reach extremely high volumes.

For this reason, many designers turn to modules for wireless solutions, as these offer pre-integrated components, normally certified for the major markets, and thus shorten design time and cost. In addition, the most advanced wireless modules will be smaller than a discrete design is likely to be able to achieve.

As wireless solutions have become increasingly sophisticated, diverse and capable, more electronic solutions look to integrate them, and often one type of radio technology is not enough. This represents an additional technical challenge, as you must not only make each work on their own, but also ensure that the two don’t interfere with each other. RF systems can have complex and non-obvious interactions.

Multiple radios in a single device

To meet this need there is an emerging trend of pre-packaged multiprotocol wireless solutions. Combined Bluetooth and WiFi modules have been common for some time, but as these use the same 2.4 GHz frequency, these are perhaps the simplest radios to combine, easily able to use the same antenna.

Here - as an example case - we will look at the challenges in integrating two quite different radios – a 2.4 GHz Bluetooth (Low Energy) device and a sub-gigahertz LoRa radio. The challenge was to integrate all the electronics and both antennas into the smallest package solution possible. Whilst there are some specific aspects to these particular radios, the overall design approach would be similar for a different choice.

The first step was to layout the electronics part of the solution. System-in-package technology was chosen to minimise size, allowing 200um spacing. Such tight spacing presents serious risks for RF crosstalk and interference, meaning a complex design cycle is required.

An initial layout was created using both hard design rules and best practice design experience. To avoid endless prototype manufacturing cycles, an iterative approach based on simulation was used. A 3-D layout of the substrate (PCB) is simulated in Ansys HFSS (CST or ADS FEM are similar tools). As a full physical model of third-party components is typically unavailable, N-port S-parameter models (which can be obtained) are used in place, which provide a close enough approximation of the RF performance of components.

In this way a full RF simulation of the RF part of the system could be created, so the key performance characteristics, such as return loss, harmonic effects, and so on, could be assessed. This allows the performance in the desired frequency bands to be optimised, and also avoids later certification issues by allowing out of band and emissions at harmonic frequencies to be analysed and the system tuned to respect regulatory limits.

The second major part of the design task was the design of the Antenna subsystem. There were two principal challenges to this part

The LoRa radio operates in the range 868 – 930 Mhz (differing somewhat by country). This translates to 32 cm wavelength. For an antenna, a quarter wavelength represents a critical length to achieve coherent transmission. As the objective in this case was to integrate the antenna into a modular electronic component of no more than 2cm in the longest dimension, this represents a significant challenge. 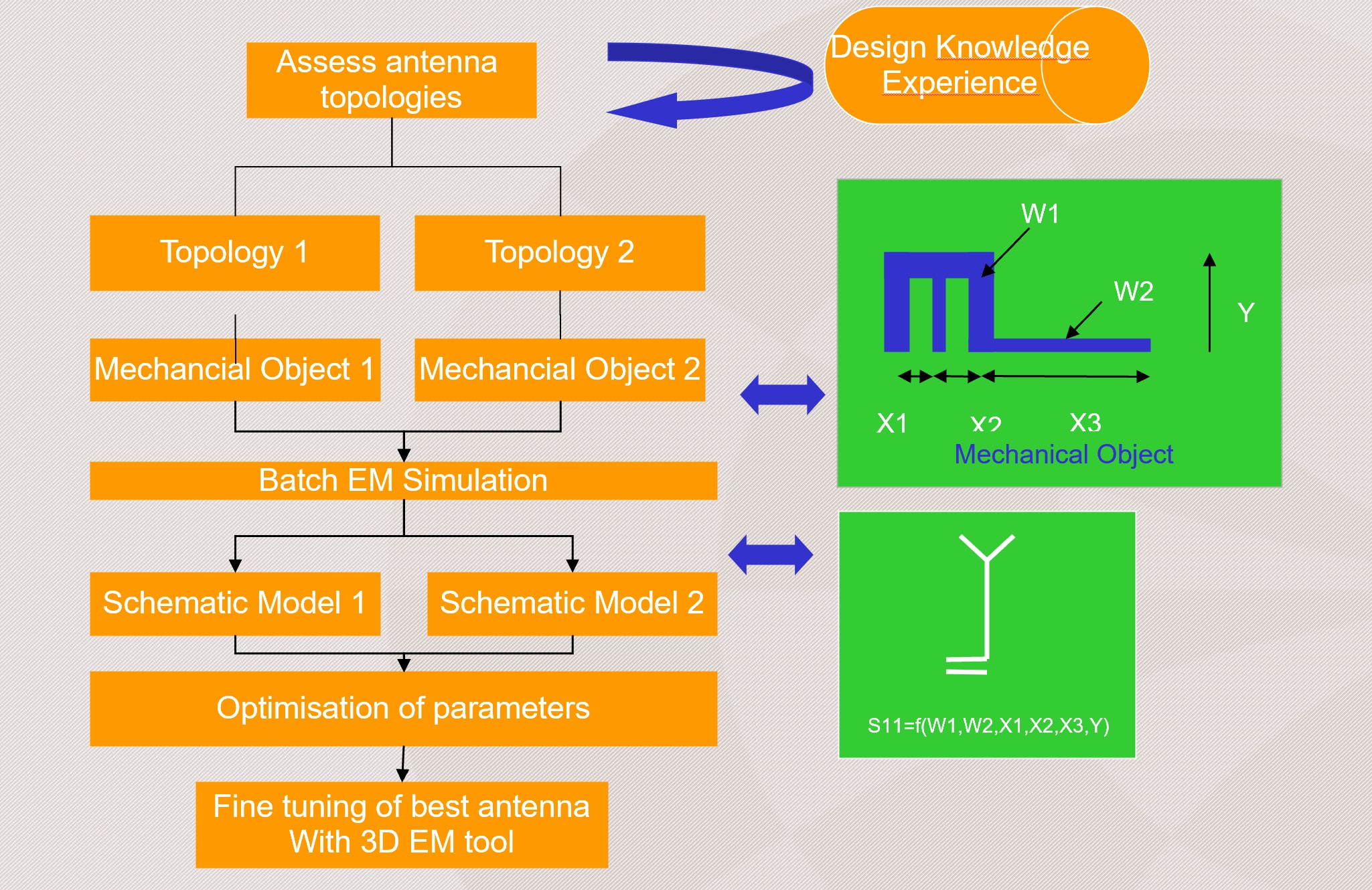 The 2.4 GHz antenna presents less of challenge for miniaturisation but has quite different physical requirements to the subGiga antenna.

Two key options were analysed; two separate antennas within the same device and a single multimode design with a diplexer to route the two radios. For both, different physical structure options were considered – a simple trace on the substrate, a 3-D structure using vertical vias through the overmold of the SiP, and a separate 3-D antenna component contained within the SIP overmold.

As with the electronics, an iterative approach was taken, combining design experience, 3-D electromagnetic simulation using ANSYS HFSS, and optimising in successive design cycles. Several alternative topologies were considered in the initial phase, with the differing choices being progressively whittled down to a final design.

For the antenna design, the use of 3-D simulation is critical, as the cycle to design, produce and test real antenna samples would be prohibitive and almost certainly lead to a non-optimal design.

Simulation is an invaluable tool but of course it can only take you so far. Once an optimal design is arrived at in simulation, a real-world prototype has to be built, and the performance measured. Comparisons of real-world measurements and simulation are then fed back into the model to refine it and optimise the solution. By this method, normally two cycles of build are all that is required to arrive at a finished design.

RF Design is often referred to as “Black Magic”. In truth it is no such thing – Radio Frequency electronics obeys the laws of physics as much as any other type. However, the key factor that makes it more complex is that – unlike a normal digital design – a topological set of connections (i.e. a schematic) cannot be simplistically translated in any equivalent physical layout without performance implications.

The solution is a combination of experience, up to date design and simulation tools and iterations to optimise. The experience is needed to ensure the starting point is likely to be close enough to what is ultimately required. The simulation tools allow one to try design options at a rate orders of magnitude faster than building prototypes. This allows rapid multiple iterations to ensure first or second time design success.