There are a number of alternative technologies available being promoted as lightweight Wide Area Networks (WANs). I use the term “lightweight WAN” to mean those using open spectrum, which in practice is the ISM bands around 400MHz, 900MHz and 2.4GHz (precise bands and rules vary by region across the world). 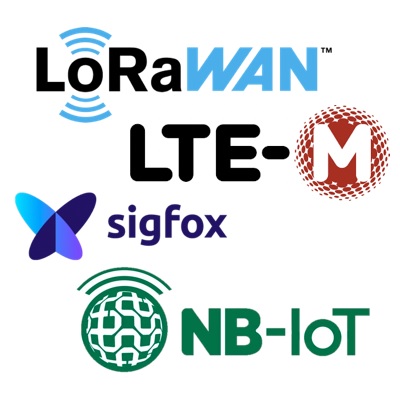 The advantage of these networks is that they do not require users to pay for expensive licenced spectrum. They typically target applications where the data rate needed is quite low and often with a low power requirement (meaning potentially battery powered). This is a segment that – at least for a long time – was not well catered for by traditional cellular solutions, with the focus of cellular development being firmly on ever higher data rates. They are also mostly targeted at “uplink” communication – end nodes sending data to a server – although some downlink can be achieved.

The competing technologies include LoRa, Sigfox, Ingenu and Weightless along with some other radio standards that to a greater or less degree cover the same technical ground. It seems unlikely all of these can thrive.

From a technical perspective, the different technologies offer variations rather than radically different solutions. There is an inescapable trade off between range, power consumption and data rate. If you increase range, you will either increase power consumption or have to dial down the data rate, or a mixture of the two. Nobody has defied the laws of physics!

Sigfox sits at the long range/low power/ultra-low data rate end of the scale, with Ingenu at the other end. LoRa and Weightless sit between them. LoRa actually offers some degree of flexibility within the standard, as its radio can adapt data rate dynamically to trade data rate for range.

Despite these limitations, there are a wide range of applications that are well aligned to these technologies. Remote reading of sensors, meters, or other measurement devices often require only sending a few bytes of data at infrequent intervals, yet can offer real value-add.

What is perhaps more interesting than technical differences is the different business models adopted around the differing standards, who owns what, and what your options are for deploying a solution. It is here that I believe LoRa has found the right mix to succeed.

SigFox is aiming to offer it all, more or less. It runs the networks, or licences other to do so and owns the patents on the radio technology. It would be the equivalent of a single monopoly mobile operator that also owned the relevant 3GPP standard.

This one stop shop approach is both a strength and a weakness. The strength is that you just have to buy an end device, and Sigfox will look after the network side for you. The weakness is that you are totally dependent on Sigfox as a company – there is no competitor to move to. And Sigfox is not a big company – whilst it has raised some $300M, it has struggled to meet its own targets, and arguably is simply trying to do too much in offering a global service. Whilst I am in no position to offer in-depth financial analysis, nor as a private company is there much data available, it would seem fair comment that Sigfox has yet to reach a position of strength and stability

Ingenu is taking much the same approach, although it is even smaller, and really only operates in the United States; it therefore shares the same pros and cons.

Weightless sits at the other extreme here, being an “open-source” project. There is a Weightless SIG, and an open standard, but it is less clear who is really driving this technology. There also seem to be a limited number of devices available on the market.

LoRa again sits somewhere between these extremes. Originally developed by French company Cycleo, the LoRa radio modulation is now owned by Semtech. Semtech offers LoRa radio transceivers, although more recently it has also licenced the technology to other vendors. So at the physical layer, the technology is proprietary.

However, for the network side, it is effectively completely open. The LoRa Alliance is an open industry body that defines LoRaWAN, a network protocol. Anyone can operate a LoRa Network, and there are offerings by traditional network operators, startup operators and some open networks run by local government, to promote technology. In addition, it is perfectly possible to create your own network – there are several vendors offering low cost LoRa Gateways. So for a large industrial site, for example, this might be an ideal solution. This also would remove dependence on operator coverage, if the site were in a remote location.

The practical outcome has been that a wide range of vendors have chosen to support the technology with modules, devices and gateways, and so the end user has choice. Semtech remain the owner of the core radio technology, but the company isn’t built around this, nor do they show any sign of wanting to do any more than offer transceiver chips.

Clearly predicting winners and losers in technology is never easy. But in my opinion LoRa has the right balance - an established technology company driving the core technology, and a diverse open ecosystem growing around it. For customers this offers a lot of flexibility and choice – things that never really go out of fashion.

The bigger question is perhaps if *any* of these technologies can survive the oncoming juggernaut of cellular IOT. After years of neglecting the M2M market, the cellular world has woken up and is offering - with NB-IOT and LTE-M - new generation IOT focussed technologies. Mobile operators clearly have the size and power to heavily promote their offerings. However even here, LoRa has the advantage of not directly competing with operators – they can adopt and offer it themselves – and also the option to build private networks independently of the operators.

A further disadvantage of nBIoT and LTEM is that they both, to some extent, have a stronger emphasis on data rate than power consumption, compared to the “lightweight” alternatives.

So whilst few things are certain in a fast moving and uncertain world, the flexibility of LoRa gives it the best chance of carving out a niche in the world of Long Range wireless IOT solutions – even if it is not clear what exactly that niche will be.