The latest version of the Bluetooth Standard (5.1) was official adopted on 21st January 2019, with the most significant development being the “Angle of Arrival/Angle of Departure” feature. In simple terms, this allow one device to find the angle from which another device is transmitting.

This has generated a lot of interest, as it opens up a wide range of new positioning applications using BLE, and coupled with the ubiquity of BLE on smartphones, it potentially offers a fairly simple route to location-based services to users. However, whilst the potential is real, it is important to understand what is behind the “buzz” and get to grips with what the technology really is, how it works, and where we are today.

Positioning with BLE prior to BLE 5.1

It is worth briefly recapping the state of play with BLE positioning prior to the 5.1 standard. With previous version of BLE, one had accessed to the RSSI (Received Signal Strength Indicator), which gave you a crude idea of the distance between two BLE devices. This is quite limited in accuracy, as the RSSI is affected a lot of unknown (and indeed unknowable) factors – the strength of the transmitters output, the orientation of the antenna, the degree to which the signal path is a clear line of sight or obstructed, and so on. So the accuracy is going to be a metres or two at best, and will degrade with distance apart of the two devices.

Nevertheless, this is good enough for some applications, and would be sufficient for, say, tracking people in a building, and letting you know which room or corridor they were in (but not necessarily if they were by the coffee machine or the photocopier!).

A bit of terminology is useful at this point. Positioning applications generally refer to having “Anchors” – which are the devices in a fixed and known location, and “Tags”, which are the devices that are moving. Thus when an Anchor detects a “Tag”, you know the Tag is within a certain proximity to the Anchor. If you can detect the Tag with multiple Anchors (three or more) you can “Triangulate” to work out the position of a Tag (i.e. use geometry to calculate an x, y, z position). The accuracy of this position is going to be limited by the accuracy of your measurement between the Tag and each Anchor.

The Bluetooth 5.1 standard adds a new capability into this domain. Rather than determine the distance between two objects, it determines the angle between an Anchor and a Tag. In practice, one would envisage an Anchor mounted in a fixed position and orientation (e.g. fixed to a wall), and then the angle of Tag could be determined relative to the position of the Anchor mounted on the wall.

How does it work?

The Angle of Arrival determination is achieved by looking at not just the received signal strength but the Phase of the signal. More specifically, the phase of the signal across multiple antennas.

The Tag transmits a specific pulse, which has a additional preamble for the direction finding. In technical terms, BLE normally uses a frequency shift keying system to encode data, which would be difficult to combine with phase detection. For direction finding a “pure tone” preamble (i.e. no data encoded) is added to allow the phase detection to occur at the other end.

The Anchor part is more complex. The Anchor requires multiple antennas (minimum two, but we believe four will be typical), and the receiving BLE devices will switch between them whilst the pure tone frame is being transmitted. By detecting the phase difference across the antennas, the angle of arrival of the pulse can be detected. The diagram below illustrates a typical antenna structure. The antennas would typically be spaced by a half wavelength, which for BLE (at 2.4Ghz) is c. 6cm. 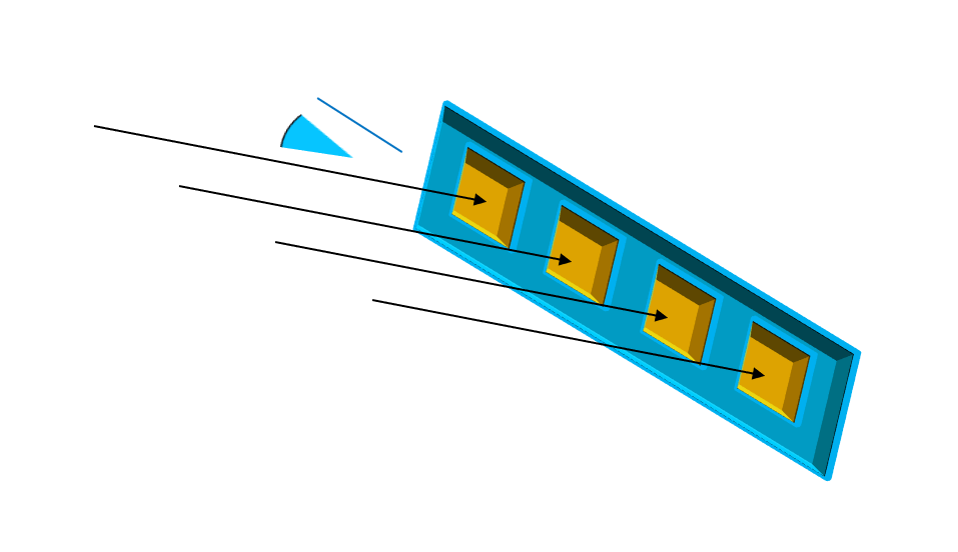 Note also that the anchor will need to support some significant processing capability as the calculations required to determine phase difference are complex.

One obvious implication of the above is that the Anchor device is not going to be small. If one assumes 4 antennas, each spaced out by ½ wavelength, then the whole structure is going to be 20cm by perhaps 5cm. The Tag, however, can be the same as any standard BLE device. In practice, this is probably not too much of a constraint, as a positioning system would typically have relatively few Anchors, fixed to walls, and size often would not be too important. But it is an important point to note.

The other more subtle point is that as this new development involves quite fundamental changes at the basic radio level of BLE, the vast majority of existing hardware will not be backwards compatible. Whilst we cannot offer a comprehensive analysis of all offerings on the market, it will in general require new devices. It also means that if one were to want to track smartphones, the majority available today will not have this feature. In order to fully use this technology, a “replacement cycle” of devices in the market will be required.

The above discussion has focused on “Angle of Arrival”. In this case the Anchor “knows” the angle that the Tag is at, but the Tag has no information about angle (unless the Anchor transmits it back). If the Tag doesn’t need to “know” where it is, then it can be in pure advertising mode, and the Anchor alone can have the position information. A typical scenario of this type would be tracking objects in a warehouse – the Anchors could relay their information to a central hub, and the position of objects reported. There would be little value in the Tag having this information.

The other alternative is “Angle of Departure”, where you want the Tag to know where it is. This case might be where you are trying for instance to guide a user through an airport. In such a scenario, the Anchors are advertising, and the Tags want the information on Angle. (In effect, this is the situation for GPS).

This is also possible with BT5.1. In this case, the Anchors transmit sequentially on the different Antennas, with information about which antenna is transmitting included. The Tag can then detect the phase difference from the signals from the different antennas and detect the angle of departure. Note that in this scenario, it is still the Anchor that has the large antenna structure. This approach is a little harder technical to understand, but the key point is that the Tag is the one that determines and holds the angle information.

Although the 5.1 Specification was adopted some months ago, it has taken a while for supporting hardware to be released. As of the time of writing (September 2019), we are halfway to having a solution.

The 1907-LL is an ideal product to be used as a low-cost Tag. It supports the BT5.1 specification and can be used to transmit and receive angle information transmissions. However, it is not able to carry out the processing required to determine the Angle of Arrival. This is a BLE module in our standard miniature 8 x 8 x 1mm form factor, with high performance integrated antenna, and pin compatible with all of our 15, 18 and 19 series devices.

We hope to have the 1907-HT available by the year end, which will support the “Anchor” part of the solution. This will be a module supporting BT 5.1 with the angle calculating capability. This will be released together with a four-antenna solution to offer a complete turnkey solution.

In the absence of actual full solutions to test, it is a little premature to make definitive statements about the accuracy. It is claimed by chip vendors that an angle accuracy of 5 degrees can be achieved, which would mean location of object could be around +/- 1m (depending on distance). Sensitivity to the environment is also a little hard to predict, although it should be less sensitive than pure RSSI based solutions.

Bluetooth 5.1 offers a significant and interesting boost to the location finding capabilities of BLE. It will allow a step change in accuracy, and thus enable new applications, whilst still remaining reasonable simple and cost-effective to implement. It will be able to exploit the ubiquity of BLE in mobile phones to offer solutions that no other technology can (albeit with a time lag whilst the phones in circulation catch up with the standard).

Like many technological choices, there is no one right answer, but a complex set of trade-offs to evaluate and make a choice. However, for many applications BLE will be “accurate enough” whilst being cheap, simple and widely available.