Angle of Arrival – Where are we?

The announcement of this technology created significant “buzz” at the time, but two and half years on, there are rather limited signs of it in the market. We have now moved on to Bluetooth 5.3, and those interested in the technology are talking about the BLE Audio technologies release in v5.2

This naturally raises questions about the Angle of Arrival technology - in short “What happened?”.

To start with, let us review the technology, and the basic terminology. It is common in positioning systems to use the term “Tag” to refer to the mobile device that is being tracked, and “Anchor” to the fixed points used to form a reference point or grid within which the Tag can be tracked.

Angle of Arrival is aimed at Indoor Tracking solutions. The simplest method of doing this had previously been using Bluetooth Beacons. These work off simple received signal strength indicators (RSSI), with position being determined by the signal strength measured at one or more anchors.

Nearly everyone carries a Bluetooth device with them in the shape of their mobile phone; alternatively, for objects a dedicated tag could be easily and relatively cheaply created. So such a solution is cheap and simple to implement.

The major drawback of such a system is the lack of accuracy. The signal strength or RSSI is hugely influenced by obstacles between the two points, the relative orientation of the transmitting and receiving antennas and other factors.

In looking at the potential accuracy of locating a Tag worn by a person using Bluetooth RSSI, then let us consider the effect the human body could have. If we imagine the Tag to as a badge pinned to a person’s clothing, the emitted advertising pulse has to traverse the body in one direction but is freely transmitted through air in the other. Thus, if we consider a person with such a Tag equidistant between two Anchors, the measurements at each anchor will be very different.

Direct transmission through the body might involve an attenuation of up to -50db. In reality, there would probably transmission round the body or reflection, but 10 – 20 db attenuation could be realistic, meaning the two equidistant anchors would infer different distances of up to an order of magnitude.

Even the direct measurement can only be assumed to be within a +/- 3 dB window resulting in a error in the distance estimation of a factor of 2 i.e. “somewhere between Zm and 2 times x Zm”. 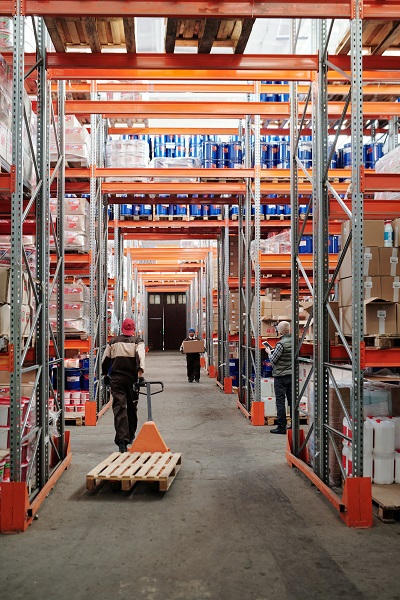 The Angle of Arrival technology was intended to improve this state of affairs. It works by having a multiple antenna array in the Anchor, and measuring the phase difference of the same signal received at the different antennas, typically separated by a half wavelength i.e. c. 6cm.

The diagram below shows a signal arriving at an angle to the antenna array, assumed to be at sufficiently long distance away that path to the different antenna elements can be considered to be parallel lines. Therefore at right angles to the direction of travel, the signal is in phase. 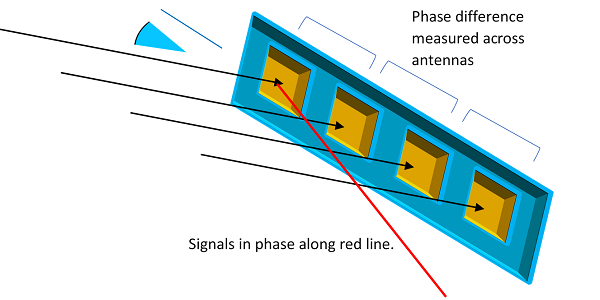 The accuracy of the angle of arrival estimate is related to 2 fundamental parameters:

The accuracy with which the phase can be measured depends on the precision of the IQ sampling carried out by the BLE device, which is affected by the internal precision of the IQ demodulator and the short term frequency drift of the crystal oscillators used in both the tag and the anchor.

In this paper we have made the assumption that the BLE device is capable of resolving the electrical phase between bursts coming from different antennas with a tolerance of +/- 10° due to the combination of the different error inducing factors.

Geometric calculations indicate that for a 2 antenna array this results in an angular positioning error of +/- 3° close to the axis normal to the antenna plane and +/-5° at 45° relative to the axis.

Similar calculations show that for a 4 antenna array the accuracy of the angle estimation is improved respectively to +/-1° close to the axis and +/-1.5° at 45°.

Assuming a more realistic angle accuracy of +/- 5 degrees, then the accuracy of location is dependent on the distance * tan (5 degrees). So at 25 m distance, one would have an error of 0.087*25 = +/- 2m. Thus with multiple anchors, one could expect to localise an object to within a “zone” of 1-2 meters, depending on the distance from the anchor.

So far so good, but that returns to the original question – “what happened ?” The first part of the answer is simple enough. The specification release is only the first step, and it always takes time for new standards to be supported in real products. However, in the case of AoA, the steps from specification to product were more numerous and complex than most.

From specification to product

Firstly, the technology requires rather basic changes at the hardware level, requiring measurement of phase angles. Older devices not designed with AoA in mind are unlikely to be able to support it. Conversely, many BT specification updates are purely concerned with software changes in higher stack layers.

With AoA one has additional complexity in the Anchor array. This is a very different device to typical a BT hardware solution, and the Anchor Array is a large specific custom device requiring significant RF design skill to produce. It is not possible to implement AoA between two standard BT modules, for example. This was a common misunderstanding. The multi-anchor readout software is also different to any other previous BT service or application.

It has taken a lot of time to get such technology together and working. Nevertheless, there are now initial evaluation kits available. and a video demonstrating the technology can be found here:

In terms of real-world performance, the technology does work. Using simple BT tags and a custom antenna array, there is a significant improvement in accuracy over a BT beacon system. However, there are still limitations in a basic system on a 2.4 Ghz radio compared with say a high frequency system like Ultra-Wide-Band. Features such as metal suspended floors can cause troublesome signal reflections that reduce precision. These kinds of effects may possibly be mitigated with more advanced software solutions.

In summary, Bluetooth Angle of Arrival has very slowly but surely moved from being a specification to being something close to useable technology. There remain some kinks to be ironed out in the implementation, but the technology can be used to make a major upgrade to positioning using Bluetooth. On the Tag side, at least, it retains the advantage of the ubiquity and low cost of Bluetooth devices.